This is the cervix of a woman who is 25 years old and has never had children. At age 14, she had an ovarian tumor removed and was prescribed a birth control pill to prevent further ovarian cysts/growths. She was on the birth control pill for 11 years from ages 14-25. She eventually became wary of the synthetic hormones and started using the Fertility Awareness Method for non-hormonal birth control and reproductive health empowerment.

During her first cervical self-exam, she noticed that her cervix was fiery red and not as pink and smooth as others she had seen in photographs. Her research on this site helped ease her concern and identify her cervix as ectropion, a variation of normal. The red area you’ll see around the os is vascular, mucous-producing endocervical epithelium (tissue that is usually on the inside of the os) which has grown out onto the face (exterior portion) of the cervix.  This area often expands under the influence of estrogen, and is common for someone who had been on the Pill since the Pill causes a cumulative rise in the body’s estrogen. 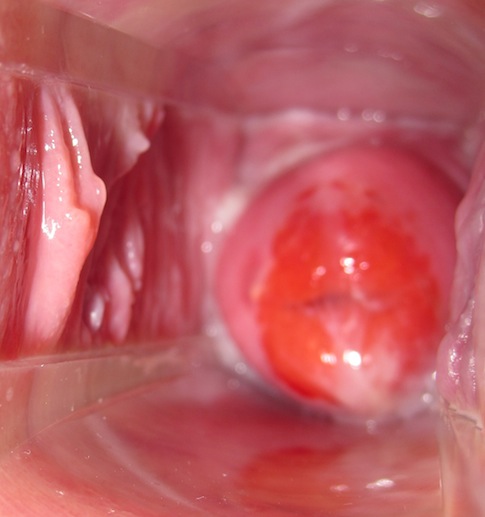